A growing sense of inclusion

A growing sense of inclusion

Last Saturday, along with many other Australians and probably many others from across the world, I watched the AFL (Australian Football League) Grand Final. It is a celebrated day – with fans walking the streets in their football colours, plenty of backyard barbeques, lots of cheering (and booing) and strong opinions about umpires, players and anything else associated with the game.

What struck me as I listened to the post-match conversations and watched the successful team as it stayed on the ground and mingled with its loyal followers at the boundary line was that something about the celebration was changing.

It was no longer just about fist pumps and running around showing off medals and the trophy. It was about real hugs (not just ‘pats on the back’) and tears of happiness and overwhelm. It was about the children of players being on the ground to share the excitement of the win. It was about unaffected conversations happening between spectators and footballers.

It was about the biggest cheers of the day being for 27-year-old debutant Marlion Pickett, an Indigenous player who spent two years in prison less than a decade ago. It was a conversation with Bachar Houli, a devout Muslim, who shared his story about finding a place to pray at the half-time break as an important part of his faith.

It felt like and looked like a celebration with genuine inclusion. What a step forward in the culture of this club and the code in general. 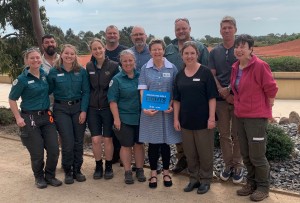 Last week, I put on a school dress to support One Girl as part of their ‘Do it in a Dress’ campaign to raise funds for girls’ education. This happened to take place on the day of the Global Climate Strike in Australia and whilst I couldn’t be there, the sign I took to the meeting I attended said ‘Educating Girls Fights Climate Change’. I held this proudly as the photos were taken and there was such a strong sense of support from the group of people I was with.

I watched the news that night to see what had happened. On reflection, that same sense of inclusion and genuine desire for change permeated the march. There were so many young people as well as others of different ages and cultures, parents with their children, workers who were given the time to be there by their employers. Once again, it felt and looked like genuine inclusion. What a step forward in changing the approach we can take to finally putting climate change on the agenda in a genuinely serious way.

Inclusiveness is an emotionally healthy way of relating. It is marked by respectful and constructive relationships and communication along with genuine compassion and caring.

Contrast that with what we continually see and hear at political leadership levels where the focus seems to be more on ‘getting back’ at our opponents – even if that means excluding a portion of the population, where real and scientifically credible data is routinely ignored, and where a courageous young woman who dares to speak from the heart about her fears for the planet is mocked and patronisingly told that she ‘should be back at school’.

Whilst one can be disheartened by these examples, I want to continue to bring ones that reflect inclusion and genuine care and concern into the spotlight. I would love to hear from you about what you are noticing and experiencing around increasing emotional health in leaders and communities.

On behalf of One Girl, Gayle would really appreciate any donations our wonderful community are able to contribute to the ‘Do it in a Dress’ campaign. Donations can be made online here.

About the Author: Gayle Hardie

Gayle is internationally recognised for her capability, enthusiasm and experience in the world of leadership and organisation transformation. She currently works with boards and senior leaders all over the world in a range of areas, including: transformational leadership and change in individuals and organisations, strategic planning and development, emotional health and leadership resilience, leading through facilitating, strengthening collaboration, and board and executive mentoring and coaching.