The capability of people to perform the work or job that they do falls into three areas:
Technical skills – which includes technical expertise e.g. accountancy skills.
Intellectual capability – which is commonly known as IQ, or cognitive abilities.
Emotional capability – often referred to as emotional intelligence or EI.

Whilst a significant amount of information, research and education exists in the fields of technical skills and intellectual capability, the area of Emotional Intelligence remains largely untouched.

Daniel Goleman, a leader in this field, has identified that successful managers and leaders possess a high percentage of emotional intelligence. By successful we mean those who have; Achieved better financial results,
Developed more effective and supportive organisational climates or culture and Achieved higher productivity gains with their workforce. Goleman’s (1998) findings also indicated that Emotional Intelligence contributes 80 to 90% of the competencies that distinguish outstanding leaders from average leaders.

The behaviours identified include;
the ability to recognise and understand their own moods, emotions and drives as well as their effect on others;
the ability to control or redirect disruptive impulses, moods and to think before acting;
the passion to work for reasons beyond money or status and the propensity to pursue goals with energy and persistence;
the ability to understand the emotional makeup of other people and the skill in treating people according to their emotional reactions; the proficiency in managing relationships, building networks and the ability to find common ground and build rapport.

IQ versus EI
In professional and technical fields the typical entry-level threshold IQ is 110 to 120. It is generally considered that your IQ, which is largely genetic, will change little from childhood. Since everyone is in the top 10% or so of intelligence, IQ itself offers relatively little competitive advantage.

EI on the other hand can be learned at any age. Growing your competency in EI is not easy or quick, as it takes perseverance in the process of critical self-evaluation, commitment to improvement and of course behavioural practice.

It is also important to note, that competence in Emotional Intelligence does not necessarily increase with age as you might expect. Some people may learn from life’s experiences, but many do not. 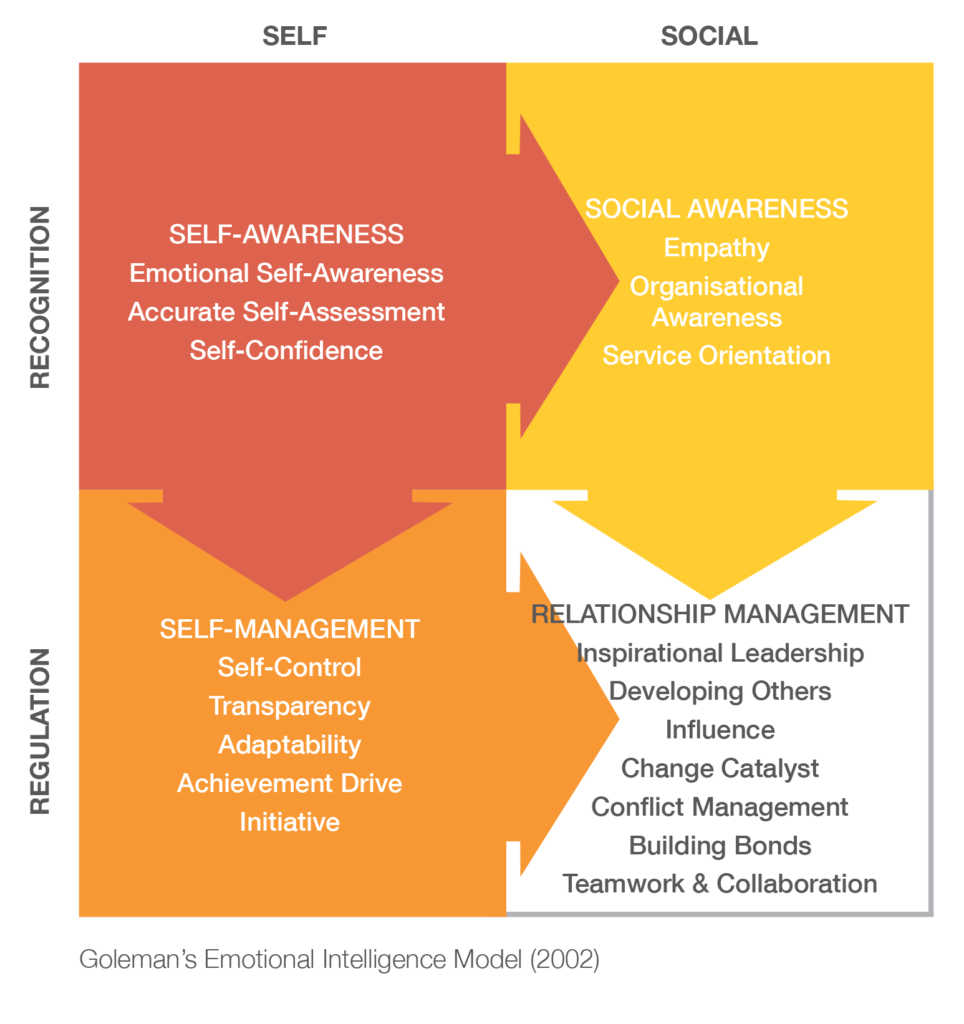 Self-Awareness:
The core of Emotional Intelligence is self-awareness. Self-awareness is comprised of three competencies;
emotional self-awareness, where you are able to read and understand your emotions as well as recognise their impact on work performance and relationships; accurate self-assessment, where you are able to give a realistic evaluation of your strengths and limitations; self-confidence, where you have a positive and strong sense of one’s self-worth. The starting point and key in these areas is the ability to be critically self-reflective.

Self-Management
Self-management is comprised of five competencies;
Self-control, which is keeping disruptive emotions and impulses under control;
transparency, which is maintaining standards of honesty and integrity, managing yourself and responsibilities;
adaptability, which is the flexibility in adapting to changing situations and overcoming obstacles;
achievement orientation, which is the guiding drive to meet an internal standard of excellence;
initiative, which is the readiness to seize opportunities and act.

Social Awareness
Social Awareness is comprised of three competencies;
empathy, which is understanding others and taking an active interest in their concerns;
organisational awareness, which is the ability to read the currents of organisational life, build decision networks and navigate politics;
service orientation, which is recognising and meeting customers needs.

Relationship Management
The Social cluster of Relationship Management is comprised of seven competencies;
visionary leadership, which is inspiring and guiding groups and individuals;
developing others, which is the propensity to strengthen and support the abilities of others through feedback and guidance;
influence, which is the ability to exercise a wide range of persuasive strategies with integrity, and also includes listening and sending clear, convincing and well-tuned messages;
change catalyst, which is the proficiency in initiating new ideas and leading people in a new direction;
conflict management, which is resolving disagreements and collaboratively developing resolutions; building bonds, which is building and maintaining relationships with others;
teamwork and collaboration, which is the promotion of cooperation and building of teams.

Research also supports the view that competence in Emotional Intelligence accounts for over 90% of the difference between ineffective leaders and effective leadership performance.

Becoming an EI organisation
The decision to become an emotionally intelligent organisation needs to be based on an organisational strategy to improve business performance.

To implement this strategy you first need to define what the core capabilities your business requires to achieve its vision, values and business strategies which includes Emotional Intelligence clusters and competencies. You will also need to identify the more specific competency profiles for positions within the organisation.

The framework can also be used to support recruitment and selection and other cultural development strategies, thus ensuring a more appropriate match of people and organization goals.  The next stage is to grow the emotional intelligence competencies through specific development programs reflecting the organisation’s capability framework.

If you do not have a “core” capability framework for your staff, there are still benefits in introducing Emotional Intelligence development programs. These are seen primarily through improved leadership and interpersonal relationships and as a result improved business performance.

Growing Emotional Intelligence
Growing your EI competencies is not easy or quick, as it takes perseverance in the process of critical self-reflection, commitment to improvement and of course behavioural practice.

Transformational Learning
When you grow your Emotional Intelligence, it is called transformational learning, as this growth comes from using critical self-reflection.

Effective critical self-reflection requires you to question yourself and the assumptions you make on an ongoing basis. This can be demonstrated through the three (3) why? Test, that is where you ask “Why” down three levels from the item you are analysing.
For example, I have been asked to present a workshop to one hundred people on a subject I know very well, and I have said no.
(1) Why did I say no? Because I would not feel comfortable doing it.
(2) Why do you feel uncomfortable about doing it? Because I might look incompetent.
(3) Why do you feel you would look incompetent? Because people in the audience may know more than I do.

The answer to this question is based on assumptions, and we need to challenge these assumptions to check their validity. If the assumptions are invalid and we change that assumption and therefore our perspective then transformational learning has occurred.